This year a few of our younger pupils performed in the Witney Dramatic Society's 2013 Pantomime, 'Treasure Island' which was held at The Methodist Church, Witney. The girls danced beautifully and we were very proud of them all.

On Sunday 21st October a group of our pupils were given the opportunity to dance in a variety performance at Her Majesty's Theatre, London, home to 'The Phantom of the Opera'. They performed a collection of numbers from our successful school show 'Stage & Screen' which was held in April 2012. We would like to congratulate all pupils involved for performing so brilliantly & professionally, they really were such a credit to the school & we were very proud of them all. What a wonderful experience & we were delighted to be involved!

In April 2012 we held our school show 'Stage & Screen' at Burford Secondary School. We had over 75 pupils taking part in all genres of dance & performed to a full house each night. It was a huge success & we were very proud of all the pupils involved. Many thanks to all parents that helped make the show possible. Alison Chapman took some wonderful photos & if you have not had an opportunity to view them yet, please contact us or look at the school noticeboard for the link.

In March 2012 the school performed at the Rotary Concert held at The Methodist Church, Witney alongside other local talent.

In January 2012 a group of our pupils danced in Witney Dramatics Production of 'Babes in the Wood' which was held at Cokethorpe School. 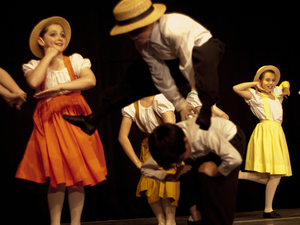